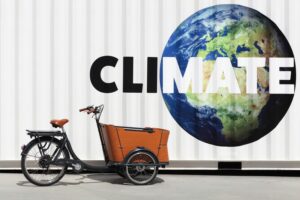 According to the UN’s Intergovernmental Panel on Climate Change (IPCC), a global temperature rise of 1.5°C or more by 2030 carries a significant worldwide risk of an exponential increase in climate events such as extreme droughts, wildfires, and floods. And if no changes are made to reduce our carbon emissions, the global temperature could rise by as much as 3°C – double the rate that scientists agree would already be catastrophic.

We all have a role to play in reducing our carbon footprint, and one of the ways suggested by the IPCC is the use of bikes as a means of transport of our daily journeys. The figures speak for themselves.  A 2015 study by the Institute for Transportation and Development Policy concluded that an increase in cycling of about 20 percent worldwide could “cut carbon dioxide emissions from urban passenger transport by nearly 11 percent in 2050.”

With this in mind, the Chester Cycling Campaign has joined forces with other Cestrians to contribute to Cheshire West and Chester Council’s response to the current Climate Emergency.  Our response has three key elements:

However, our detailed response contains suggestions for how this can be achieved and what the benefits for all Cestrians might be.  Use the link below to download a copy of our full response….