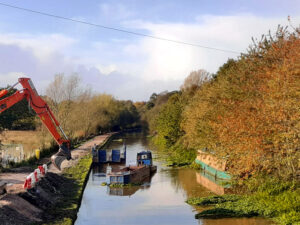 Chester cyclists will welcome the work has started to resurface sections of the towpath to the east and west of the city centre.  The resurfacing scheme is partnership between Cheshire West and Chester Council and the Canal & River Trust, who hold the guardianship of the canal and towpath. The project will see the upgrade of three sections of towpath along the canal between Chester and Ellesmere Port, which are part of National Cycle Routes 45 and 70. The towpath will benefit from widening, together with improved surfacing and access points.

Work commenced in October 2020 near the Caughall Road bridge over the canal where the towpath is being widened to 2.5 metres and is being resurfaced with a 100% recycled material called Ultitrec.  Chester Cycling Campaign has long been pressing for the resurfacing of the towpath which in recent years has become almost unusable by cyclists due to the poor surface which was dangerous in sections due to the subsidence of the towpath edges.