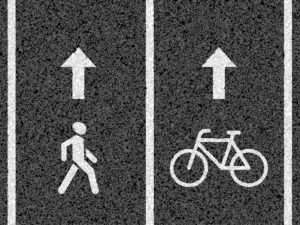 After only five months of operation, two Chester’s new Active Travel Lanes were ‘paused’ on 1 March 2021 following a recommendation from the Emergency Active Travel Lanes Working Group. This independent group which was set up by the Sustainable Transport Task Force carried out a review of the lanes using traffic volume data and feedback from residents.

Although cycling increased along the A51 at weekends, there was insufficient evidence to draw a firm conclusion that safe cycling and walking had increased. Also, the COVID-19 pandemic resulted in lower than normal levels of travel which has added to the challenges of fully evaluating the effectiveness of the lanes. Consequently the decision was taken to ‘pause’ the lanes on the A5116 Liverpool Road and on the A51 in Boughton.

Meanwhile, the Sustainable Transport Task Force will be considering alternative options to increase cycling, walking, public transport and other sustainable transport in Chester. Further research has started in an effort to review and develop options to adapt, extend or replace the current lanes.

The lanes were originally established in October 2020, after the pandemic lockdowns had reduced road traffic, enabling many people to discover the joys of cycling free from the threat of vehicles. The Government had instructed Councils to capitalise on this to encourage walking & cycling. Cheshire West and Chester Council  submitted a successful bid to the Department for Transport in May 2020 and received a £161,000 Tranche One allocation from the Emergency Active Travel Fund (EATF) for pop-up cycle lanes with protected space for cycling, together with other provision for reallocating road space, and creating wider pavements.

Public consultation on how to use this funding was carried out through the council’s ‘Walk. Ride. Thrive.’ initiative, and the Cycling Campaign was able to have input via the Council’s Active Travel Forum. Three schemes were eventually funded in Chester:

Opposition by car drivers to these schemes has been vociferous. The Campaign’s view is that, whilst these schemes are far from perfect (lanes shared with buses, taxis and motorcycles and starting and finishing in potentially heavy traffic), we fully support the Council in trialling ways to allocate more space, on and off the highway, to Active Travellers in general and to cyclists in particular. We will continue to participate in the Active Travel Forum and in the Sustainable Travel Task Force to ensure that the views of cyclists are front and centre in any discussions.

CWAC has also been allocated a total of £611,800 in Tranche Two EATF funding.  This will be used for schemes outside of Chester itself, including some dedicated cycle lanes in Helsby and Frodsham.

You are able to submit your own ideas to CWAC.  The council’s ‘Walk. Ride. Thrive.’ campaign is still active, enabling you to submit your views and suggestions about the walking and cycling improvements you would like to see in Chester.  The consultation tool features an interactive map onto which pins can be placed with suggestions for improvements.  You can access the tool using the link below. Note that there is also a survey on the same website which residents are encouraged to complete.

You can also make your suggestions simply by emailing: TransportStrategy@cheshirewestandchester.gov.uk

You may also wish to consider joining the Chester Cycling Campaign. This will enable you to join in our electronic discussions and to add your weight to our campaigning activity at this critical time which holds out the promise of a significant change in how we travel within and through the city.