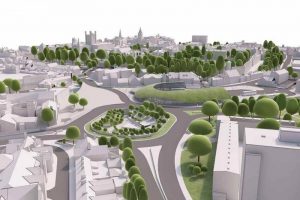 A flurry of activity recently has seen Chester Cycling Campaign members become involved in a number of initiatives to further our goal of creating a more cycle friendly city.

Sometimes we are working behind the scenes, meeting with councillors and developers.  At other times, we are out out actively campaigning on the streets for changes to our city’s transport infrastructure.  The work is very satisfying when we can see that our efforts have resulted in benefits for Chester cyclists.

Here are some examples of where we have made a difference recently:

Campaign members have engaged with developers over new Gorse Stacks Bus Station and successfully persuaded them to improve access for pedestrians and cyclists. The plans for the development did not include any cycle parking or cycle paths to link the site with other local routes used by cyclists.

After our interventions, the developers included a new shared use pedestrian/cycle route along Gorse Stacks beside the bus station. Ten new Sheffield stands were incorporated into the design after our submissions. We would have preferred these bike racks to have been sited nearer to the bus station buildings or incorporated within them under cover, as there is plenty of space to accommodate them. Nevertheless the new stands are beginning to be used and would never have been included if we hadn’t intervened.

Campaign members met with council staff and attended consultation meetings regarding the new road layout in Upper Northgate Street. Here are aim was to ensure that cyclists would be able to enjoy two way cycling in this street following the completion of the works. Despite the constraints of the site and the sweeping curve bringing traffic around into Delemere Street at some speed, we were able to agree plans which would incorporate a shared use pedestrian/cycle path along the pavement on the east side of the street.

The works will also include a ramp to enable cyclists heading south into the city centre to continue their journey across the Canal Street junction without the need to dismount.

A ‘public realm’ project associated with the new Gorse Stacks Bus Station has completely revamped Frodsham Street, providing a shared use surface to the roadway and the installation of new street furniture.  Campaign members have been pressing for two way cycling to be allowed in this street for over a decade, and have finally achieved this after a great deal of campaigning.

This campaign objective had to be fought for twice! Two-way cycling was included in the original plans but this was later removed to our annoyance. However, after further campaigning, the council agreed to the restoration of two-way cycling. This has made visiting premises on Frodsham Street much more convenient for cyclists who no longer need to use a long circular route for their return journey.

We always welcome assistance with any of our projects.  Get in touch and find out how you can help!  Or you can help the Campaign by simply joining as a member.