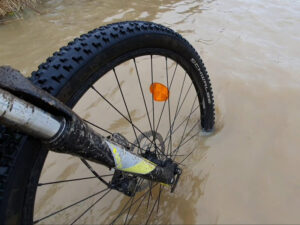 For the past several winters, the Chester Millennium Greenway has suffered from flooding between Long Lane and the A55. This has affected all users of the path, including cyclists and pedestrians. Shallow flooding is less of a problem for cyclists who can often cycle through with little difficulty.  However, with deep flooding this section of the Greenway can become impassable, as it is difficult to gauge the depth of the water and impossible to seen any hidden obstacles.

Sustrans who own and maintain the path are aware of the problem, which has become more serious recently due to ground works which have taken place in the fields above the path. Sustrans is exploring legal solutions to the problem in order to prevent water from flowing onto the path in the first place. This is the best solution to the problem, as significant costs would be associated with an engineering solution at path level which might involve constructing an elevated catwalk above the water.

Fortunately severe flooding only occurs a few times each winter, but this can still cause serious inconvenience to path users who need to retrace their steps and find an alternative route.

Until a solution can be found, Greenway users will need to try to become aware of times when flooding has occurred in order to plan their journeys.  Sustrans’ suggested diversion involves the use of Long Lane, Mannings Lane North, The Street, School Lane and Station Lane as shown in the map below.  (Click on the map to enlarge.)

The Chester Cycling Campaign and local Sustrans Rangers are very aware of this issue and are actively exploring all possible solutions with Sustrans and the local council.