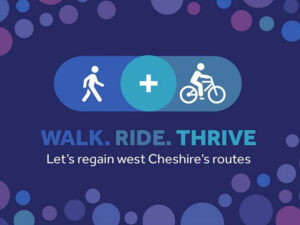 Cheshire West And Chester’ Council’s “Walk. Ride. Thrive” Local Cycling and Walking Infrastructure Plan (LCWIP) 2020-2030 was approved in July 2020. Campaign members had been part of the LCWIP working group since it was formed (June 2019).

LCWIPs are an England-wide initiative from central government to encourage local authorities to develop realistic plans to encourage more people to cycle and/or walk. It is advantageous for local councils to have an LCWIP when bidding for funds to improve infrastructure and is an essential part of the Council’s focus on tackling the climate emergency”, which is one of its 6 priorities to 2024. The Council has declared a Climate Emergency and aims to reach carbon neutrality by 2045 or earlier, preferably by 2030. This will require a 17 per cent reduction in total travel demand & a 25 per cent reduction in car travel by 2025.

For each major urban area of the Borough: Chester, Ellesmere Port & Neston, Northwich, Frodsham & Helsby and Winsford, the cycle & walking infrastructure improvements which would make most difference were identified. For cycling in Chester, the priority route was a route linking the station with Wrexham Road/Lache – see map. Campaign members were keen that Grosvenor Bridge should be made safer for cyclists, rather than cyclists being expected to only use the route across the Old Dee Bridge, so Grosvenor Bridge was selected for priority analysis.

Public consultation on the draft plan produced over 700 replies, from individual residents, local stakeholder groups and organisations. The Council deemed it an excellent example of partnership working. The LCWIP has to be reviewed and updated approximately every four to five years to reflect progress made with implementation. The Campaign are already working to build on the LCWIP process with our Chester Cycle Map project – we are working on a cycling infrastructure plan for the whole of Chester.

One of the reasons for the Grosvenor Bridge scheme being selected for funding from the Emergency Active Travel Fund is that it was in the LCWIP.

You can download a copy of the CWAC LCWIP document using the link below: