A sportive or audax (also known as a randonnée) is an organised cycling event designed to present a challenge to you as an individual. Most are one day events. Distances, rules, level of support, recognition award, number of feed stations and other features vary from event to event.

Most sportives have a number of routes of varying distances, all starting and finishing at the same point. A typical selection of distances might be 30, 65 and 100 miles. In most cases, it is possible to enter specifying a longer distance and then cut back to a shorter route if it all proves too much. If you change route or drop out entirely, you are required to inform the event organisers. Most events will have a ‘sag’ wagon following the last few riders in order to pick them up in case of breakdown or accident. However, you should still set out with a spare inner tube, patches and the knowledge/tools of how to repair at least a puncture.

Sportives usually have a published cut-off time for finishing, but this will be generous enough to get everyone back before the event is closed. Where there is a selection of distances, there will usually be a cut-off time at each point where the routes diverge. 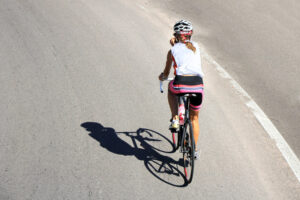 Any type of bike can be ridden on a sportive, including recumbents, tandems, hybrids and mountain bikes. However, for most participants a road bike or audax specific bike will be the best option. (The Ribble Endurance and the Tifosi CK7 are examples of UK specific audax bikes.) The most important thing is to ride a bike that you are used to and that you find comfortable. Ensure that it is mechanically sound and properly adjusted.

Signposting can vary considerably. Most of the more commercial events have lots of signage, whereas others may simply issue a route sheet. Most sportive rides, if not all, also provide GPX files of the route before the event. It is always worth studying the route beforehand to familiarise yourself with the terrain.

Sportives offer no prizes, as such, but there are often mementos or a t-shirt for participants or finishers.

If you are thinking of joining an event, you should bear in mind a few points:

Here are a few tips if you are new to sportives:

Why not give it a go? Chester and North Wales CTC organise a number of sportive rides locally, such as the ‘Spring 50’ and the ‘Bob Clift Memorial Ride’.  More commercial sportives are run by Evans and The Bike Factory bike shops in Chester.