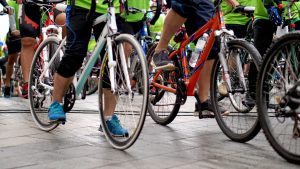 How can you win friends, relatives and colleagues over to cycling? Often people have preconceived notions about cyclists and cycling which can act as barriers to them taking up cycling.  If we are to persuade more people to cycle, then we need to have persuasive and convincing answers to the kinds of objections that most people raise regarding cycling.

Here is Chester Cycling Campaign’s guide to winning people over to cycling (with thanks to Cycling UK who have previously published most of this material in their booklet, ‘Bike Club Start-up Guide’).


Don’t cyclists need to wear helmets for safety? I think this would put many people off.

Cycle helmets don’t prevent injury in all circumstances, and they certainty won’t protect you from bad drivers, who present the greatest hazard to cyclists. The focus on wearing helmets detracts from the real issue — bad driving.  Standards for cycle helmets require only that they withstand an impact of 20 kilometres per hour ( 12 ½ miles per hour). This is the kind of impact that would occur if you fell off a bike all by yourself — something that children are much more likely to do than adults. Helmets are not designed to protect against the kind of impact that would occur if you were hit by a moving vehicle. Unfortunately, in the UK, much of the debate about the efficacy of wearing helmets seems to end up focusing on questions about whether the wearing of helmets should be made compulsory. When laws have been brought in, in other countries, to compel people to wear helmets, this has always reduced the number of cyclists, without reducing the number of cyclists who are injured. If people are forced to wear helmets, this leads to fewer people cycling, and more risk for the remaining cyclists.

You’ll never get large numbers of people to cycle.

Yes, we will! There is huge potential for increasing the use of cycles In Britain. There is already a large amount of recreational cycling. Currently cycling is the third most popular form of physical activity for adults (after football and swimming).  But the use of bicycles as a form of transport remains very low, with fewer than two cent of trips being made by bike. Only a small percentage of young people cycle to school, and the majority who do so are male. To understand how much potential there is, look at the rates of cycling in other countries — in the Netherlands (which has weather fairly similar to the UK) 49% of primary school children cycle to school.

Over two thirds (68 per cent) of all trips, and over half (58 per cent) of car trips, cover less than five miles. This would take about half an hour on a bicycle. It would be so easy to use bikes instead of cars for many of these journeys.

By helping more young people and families to get more active on their bikes, more of the time, the resulting increase in future generations of road users will benefit all cyclists.

Our roads would be safer with no cyclists.

On average, about 3,000 people die from road traffic accidents in the UK every year. Out of these, about three involve only a cyclist and a pedestrian. The remainder involve motor vehicles. In addition. there is evidence to support the idea that the more people that cycle, the safer it gets for all road users.

I would never want to be associated with that group of law-breaking nutcases. All they ever do is jump red lights and cycle on the pavement.

Cycling on the pavement can also be dangerous. However, the vast majority of pedestrians are killed by motor vehicles rather than by cyclists.

Often when cyclists jump red lights or ride on the pavement, this is because they are inexperienced and don’t feel safe cycling in traffic. Any cyclist who doesn’t feel confident would benefit from cycle training.

Bikeability is a cycle training program which aims to give people of all ages (including teenagers and adults) the skills to handle real traffic confidently, safely and legally, so that they can cycle more safely and more often. Cycle tracks on pavements that are also used by pedestrians further confuse cyclists – suddenly a bit of paint transforms previously forbidden pavement into a designated space for cycling! We believe that widespread cycle training and a reduced emphasis on shared-use pavements would be the best ways of combating these common forms of bad behaviour by cyclists.

Cyclists don’t pay road tax, so you have no right to complain about the roads or drivers, or to take up road space, do you?

Actually, most adult cyclists do pay to use the roads through general taxation. Road tax was abolished in the 1930s. Money to maintain the roads comes out of council tax and income tax. That means that nearly all adult cyclists do in fact pay for the roads. It also explains why low emission vehicles and electric cars do not have to pay Vehicle Excise Duty (road tax) and yet are able to use the roads. Cyclists do minimal damage to the roads, in comparison with cars and other motorised vehicles.

Shouldn’t all cyclists be made to use cycle lanes?

Off-road cycle tracks are not necessarily safer than roads, and cyclists are allowed to use all roads in the UK (except for in a few cases, such as motorways). The Highway Code states that cyclists do not have to use cycle facilities if they do not want to. Cycle paths, especially those that run alongside a road, are not necessarily safer than the road. Motorists may not be aware that there is additional traffic running alongside them, which may lead to conflicts at junctions. It is essential to educate drivers to be more aware of cyclists, and to give young cyclists the skills they need to cycle safely on and off the road.

Cycle lanes (lanes painted on the road) are often not wide enough to help cyclists, and sometimes they are so narrow that they cause more problems than they solve.

Cycling is dangerous. So many cyclists get knocked over by cars that you’d have to be crazy to risk it.

Not cycling is actually more dangerous than cycling. The health benefits of cycling far outweigh the risks. Heart disease and obesity are two of the biggest killers in Britain. One third of people in the UK die from illnesses related to physical inactivity. In comparison, there is one fatality for every 32 million kilometres cycled.

Cycling is dangerous. There are too many other cyclists out there who ride like maniacs.

Only a small proportion of illegal cycling is actually due to intentional anti-social behaviour, The vast majority of people who cycle illegally do so because they feel as though they have to decide between what’s legal and what’s safe. The best way to encourage people to cycle lawfully on the road is to make that space inviting to cyclists. Reducing speed limits, enforcing traffic laws for all road users, and making cycle training readily available to people of all ages are the best ways to combat illegal cycling.

Cycling is dangerous. There are so many pot-holes in the road that I think it would be impossible to avoid crashing.

The best way to avoid accidents of this kind is to look out for pot-holes. You can learn to keep an eye out for them and to cycle round them. The ability to do this while paying attention to other traffic is something that comes with practice. If you’re worried about this, cycle training such as Bikeability can help you develop your cycling skills.

Local councils have a duty to keep the roads in a safe condition, and the vast majority of them take this very seriously. It’s quick and easy to report any pot-holes you notice — go to www.fillthathole.org.uk.